Budva is considered one of the oldest settlements in the Balkans. The legend, according to Greek mythology, says that Budva was established by Cadmo, the son of the Phoenician king Agenon. He was expelled from Thebes and arrived by ox-drawn car in this area where he started Budva.

The old town of Budva lies on a little island that was linked to the land by a sandbar and in time turned into a peninsula. It is surrounded by ramparts originating from the XV century including a medieval fortification system with city gates, defense walls and towers. Inside the walls the town is a combination of narrow streets and little squares with valuable monuments of different Mediterranean cultures that marked its development: - The St. Ivanâ€™s church, VII century, has pictures and icons by Venetian artists from the XV - XVII century.

There is a library in the church and an archive where valuable examples of the old church books are kept. - The Church of St. Mother of God, Mary in punta, was built by the Benedictines in 840. - The St. Sava church originated from the period of Nemanjici in the XIV century. 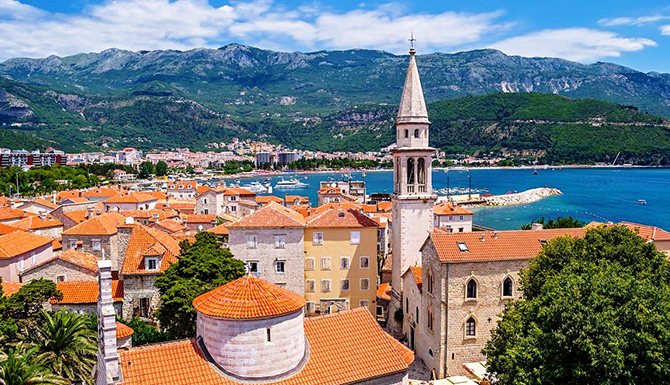 It was first mentioned in 1413 in the Charter of the Zetaâ€™s ruler Balsa III. - The St. Trinity church is from 1804. There is a grave of Stjepan Mitrov Ljubisa, a famous writer, in front of the church. The church is located in the old town in front of the Citadel. Today Budva is a center of tourism and a city of theatre, festivals and celebrations. It is a summer stage for cultural productions. The walls of the old town of Budva begin on the edge of the sea coast. The townÂ´s history has become myth and legend. Within its ancient walls, life teems in this historical setting. Fortresses and squares become stages under the open skies. Internal spaces of churches become galleries and concert halls. Writers and poets from around the world converse with art admirers on the Poetâ€™s square. In hidden wine shops you can rest enjoying the music of seaside bands , fish, squid, mussels, good wine and romantic atmosphere. The hyper-urban generation participates in collective madness in the numerous coffee bars. You should simply enjoy the Budva night life, follow the rhythm dictated by your heart and you will certainly have an excellent time. Perhaps, a little shopping could get you in a good mood. While enjoying the nightly hustle and bustle and watching the gracious girls in Old Town, the biggest pessimist would have to believe that beauty will save the world.

The first organized tourist arrival in Budva, are mentioned in the 1930â€™s. The beach tourism began with the arrival of the first foreigners, Czechs, to the coast of Budva Riviera. Since then and until now Budva has largely developed, in the tourist sense. On the 12 kilometers, from Jaz to Petrovac on some 20 beaches, in the warm sun, from the 10th of May until the 8th of November you can enjoy for 182 days. Budva Riviera has the surface of 122 km2. Budva has 25 kilometers of jagged coast.

The climate in Budva is typically Mediterranean, which means that the winters are mild and summers usually dry and very hot. Budva has 2.300 sunny hours per year. The temperature of the seawater during the summer is between 21 and 25 C0.

On the Riviera with pearly beaches, as Budva is also called, we have: 2 km away from Budva is the beach Jaz, 200 meters away from the Old town there are beaches: Mogren I and II, next to the walls of the Old town we have the beach called Ricardova glava (Richard's head).